Junior Grand Prix (JGP) just started at Courchevel, France, and two girls landed a triple axel (3A)in their free Skating. Unfortunately, the broadcast of the competition didn’t have so many cameras. Only one camera angle will restrict our analysis.

From Korea, Yujae KIM landed her 3A with missing rotation, called “q” by the technical panel. 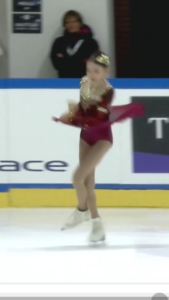 Data without comment are useless.
Flight time: 0.625s ok (Average 0.632s)
The snap is the moment from the take-off to the final air position. Yujae’s angular velocity of the snap is 25.133 radian per second. It’s excellent. The average data is around 23.149rad/s. We can see that she spins fast.
The approximate height is around 41centimeters. Kim is 145cm.

Duration of the forward part: 1.042s. It’s too long (Average 0.750s)
Time of the right leg move: 0.333s ok (Average 0.444s)
If I were part of Yujae’s coaching team, I would work o the extension part of the take-off, especially to get the upper body more extended and open. 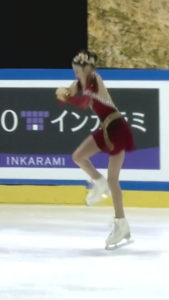 From Japan and winner of the first JGP of this new season, Hanna Yoshida also landed a triple axel as the first of the eleventh elements. Unfortunately, she scored an average of GOE-1 ( grade Of Execution).

The approximate height is around 55cm. Hanna is 154cm, according to her bio on isu.org

As mentioned before, the camera angle provided by the broadcast doesn’t give any profile view of the jump. It would be interesting to understand the body weight transfer at the take-off. This ineffective body transfer is one of the reasons Hanna stepped out at the landing. It seems Yoshida closed too fast her right hip. Her body axis in the air oscillates a lot. It reminds me of the axel jump technique of Rika Kihira (from Japan). These two Japanese skaters share the same coach, Mie Hamada. 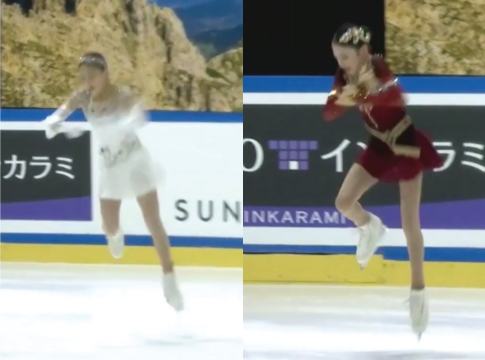