Toe-loop: Importance of the 3-turn

Last Junior Grand Prix, at Linz, the execution of the quad toe-loop by Anastasia ZININA, from Russia, reminds me of the importance of the turn’s good performance.

The excellent execution of the 3-turn allows the skater to:

-increase the momentum (force gained by a moving body)

-be directly on the right leg in the outside back edge (distinctive feature).

Why being on the back outside edge is essential?

Being directly on the back outside edge will allow better body control when the skater taps the ice (top pick’s position).

If the entire blade gets in contact with the ice, the skater will jump around 10-15% shorter and smaller than a forward contact. He will also get a wrong body axis during the take-off. Thus, increasing a lot the risk of fall or under rotation of the jump ( << or < ).

During the change of foot, Anastasia put her right foot into the inside backward edge. She did a slight change of edge. The main consequence of this is the contact on the ice of her blade during the toe-pick and swing (pivot) phase of the jump

Skater doing a toe-pick with the half, or the full part of his blade increases the risk of knee and ankle injury. Because the joint takes all the energy of the stopping movement instead of doing a rebound.

Then, the skater tapping the ice like this changes all his body weight and, consequently, his body transfer efficiency.

We notice that her body weight is significantly on her backward.

To change the edge from inside to outside edge, you must move up your left hip. In addition, the skater is doing a rotational movement of his left leg to tap the ice.

The hip opening is changing the position of the foot and the blade.

The result is more the change of edge is significant, the more the skater will use his half part or whole part of his blade.

The consequence of an inefficient technique of the take-off

Due to a bodyweight transfer not being efficient enough, the quality of the landing is impacted. The skater (especially for girls who are not powerful enough to compensate for the lack of transfer) will land in the “angle of fall.” 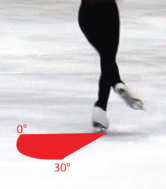 This angle is between under-rotated landing and around 30°. Landing at the angle only allows the skater to fall because of physics and gravity laws.