The Czech figure skating federation held the second Junior Grand Prix this season, and it was exciting to watch
I had the chance to be there so that I could record a few triple axel and quad toe loop (4T). Let’s talk about Mao Shimada from Japan.
The first analysis highlights the toe-pick leg, how Mao moves her leg, and makes contact with the ice. It was shot during the official training.

The first analysis highlights the toe-pick leg, how Mao moves her leg, and makes contact with the ice. It was shot during the official training.
The launch angle combines the skater’s vertical and horizontal velocity at the take-off. Having ice contact with the entire blade influences a lot the launch angle. To make it short ( I planned to explain in another blog the importance of the launch angle), the skater is getting off the ice to flight as long as possible. 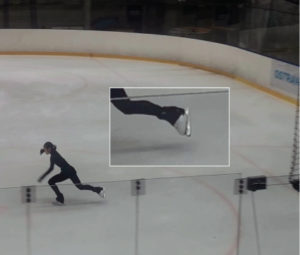 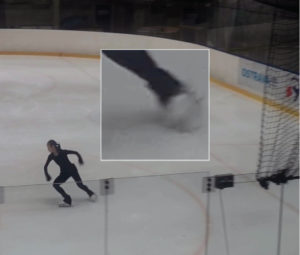 During the 6min warm-up, Mao succeeded one quad toe loop but unfortunately no video.
From the Free Skating (FS) ISU broadcasted, we can get this view to understand better why Shimada moves her free leg like this. In every jump, the most important is the preparation; here, it’s the 3-turn.

During the two feet part of the preparation, we can see that her body weight is not correctly on her right axis. The next move is the foot change, meaning she should anticipate this and transfer her weight to the right leg. It explains why she is doing a change of edge (inside->outside). 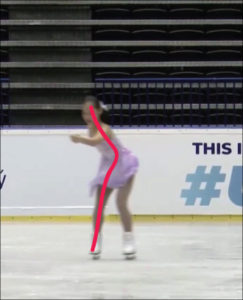 For a triple toe, it’s not so important; it’s recommended to do a quick change of edge but for a quad. Each aspect of the preparation must be optimized. 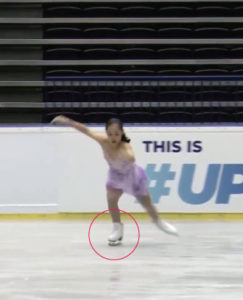 Her inside backward edge is making her unbalanced. The main consequence is opening the left hip to tap the ice too much. On this attempt, her Center Of Mass (C.O.M, noted with the blue arrow in the picture below) is almost aligned with her toe-picks. But the vertical velocity direction is not fully effective (red arrow). 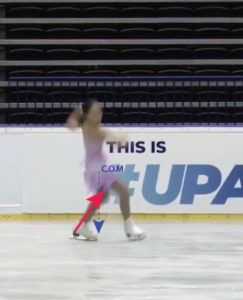 This stromotion is done from the video I filmed from the audience, a profile view to add more value to the ISU video.

The preparation is really long. Mao takes from the moment she is backward to tap the ice, 1,478s (On average, 0,768s). The approaching speed with a start backward and then a turn generates an effective angular momentum. Mao doesn’t use this effect so much. 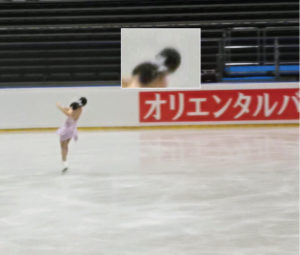 In this picture, we can see that she holds a lot of her head. 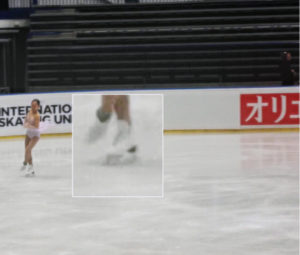 The result is a landing called < (Under-rotated). That’s why she fell.

This jump had a longer Flight Time (Ft) than the one recorded during the training. 0.638s in the air instead of 0.604s. The angular velocity of the snap ( the snap is the moment the skater takes off to the final air position) is almost the same in both studied jumps ( around 28 radians per second). The small difference in how Mao Shimada toe picks between the 4T executed during the training and the FS, and this explains the difference between the data.