It’s not a secret. I’m a big fan of the triple Axel of Alena Kosternaia from Russia, and I like the height of her jump and her efficient rotational move. Does this move be effective? Difficult to say, but she seems to create enough angular momentum to succeed in her triple Axel. Unfortunately, her rate of success is low.

When I was looking at the performance of Alina during the Internationaux de France last week’s senior ISU Grand Prix, something drew my attention. Her air posture is not fully tight. And she has this particular posture on each of her jumps. Is it the reason for her failure? 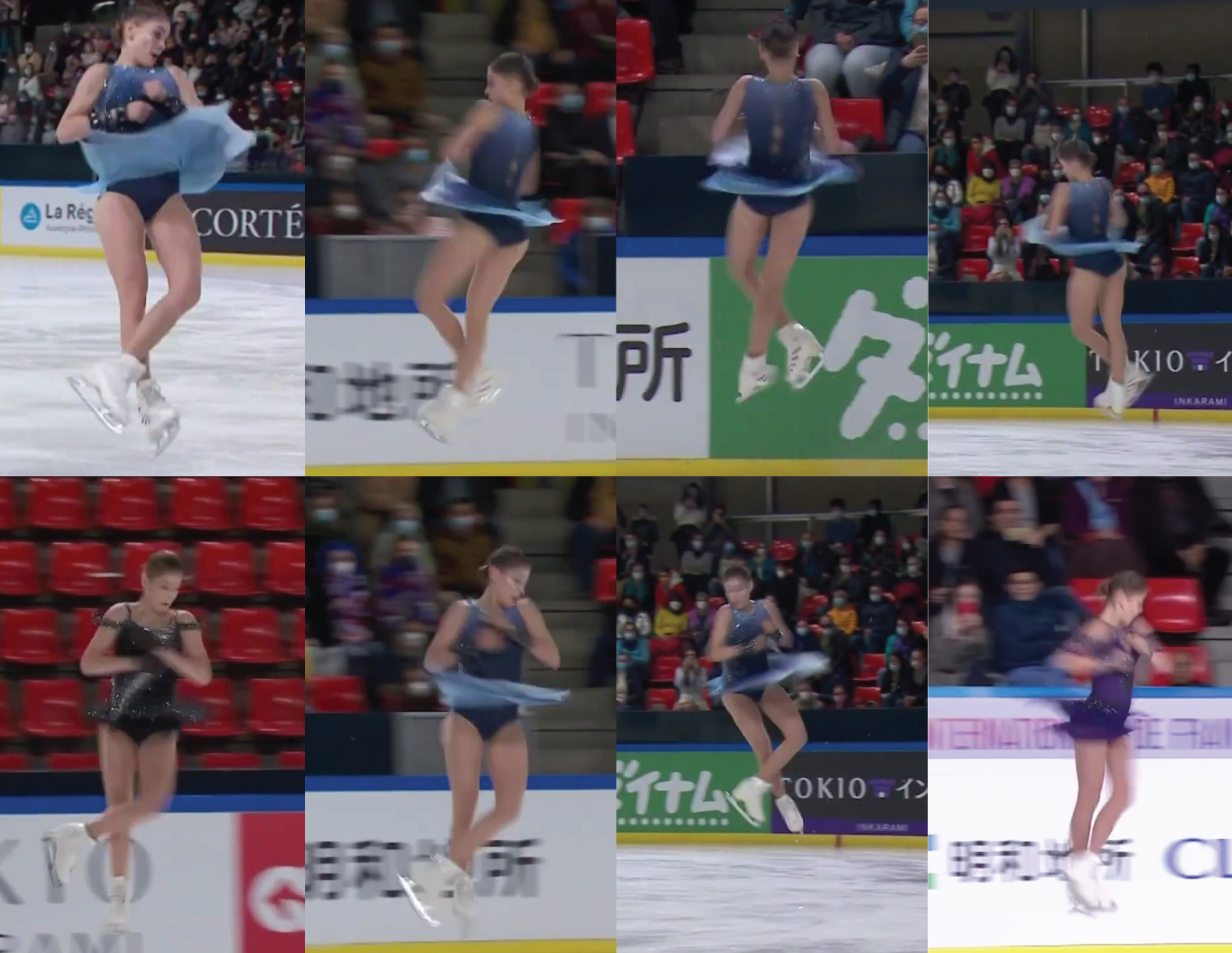 These screenshots are taken from her Free Skating, Grand Prix de France 2021.

As you will understand, this tiny gap between her legs in her final air posture is not the source of her trouble. We should look before her snap’s move: the movement she is doing from the take-off to her final air posture. Below, I designed a timeline of her move with a focus on her legs.

This considerable movement is, unfortunately, the way she found to get an explosive push. That’s unfortunate because this strength is also her weakness. Her left leg goes up too high, and then it takes too much time to gather her limbs and get them down to the final air posture.

From the left, the first picture shows clearly that the launch angle (or take-off angle) is higher than the normal range (30-35°).

The flight time of her triple Axel is 0.660s. The duration of her snap (From the take-off to the final air posture)  is around 0.520s. It means she moved in the air 78% of her flight time, and it is surprising.

A skater should create enough angular momentum during the preparation and force production part, then accelerate his angular velocity. Alina fell on her 3A attempt because her landing is under-rotated (noted <). Her snap slows down her angular velocity because the flight time is correct.

Maybe you think she does this only with her triple Axel, not at all.
These are different jumps with the duration of her leg’s move (up and down) compared to the flight time.

The flight time of her double Axel is 0.610s. Her left leg moved during the flight. As she jumps the triple Axel, it’s a normal phenomenon.

What about the toe-pick jump like Lutz and Flip.

We can summarize her jump technique like this: She jumps with a long bodyweight transfer then rotate. It asked her more quickness in her snap, even if she jumps higher ( Approxi. height of her 3Lz: 55cm, average data 45cm). Specific training should develop a quick snap on the ground and ice.

How she is reaching this final air posture and the duration are crucial to land fully-rotated the jump. And even more essential for a combination jump. Getting this air posture means having a good compromise between vertical and horizontal velocity. This way to get this posture must be well-balanced—a skater jumping higher than the average needs to work on his rotational abilities.

According to my experience, once or later, your strength could become your weakness, especially on quad jumps where it requires high efficiency. Unlike a skater who is rotating quicker than the average, she will have to develop her explosivity at the take-off of his jump to increase her flight time.

A combo jump has a higher rate of success (and a better Grade Of Execution, GOE) if the skater lands the first jump lands fully rotated, and it allows her to keep a maximum of her skating speed (and his balance).

As a reminder, having a balance on one foot means being on one foot with a certain skating speed in ice skating. The more you increase, the easier it’s to balance his body (with, of course, a correct posture).