Rion Sumiyoshi from japan is one of the rare Japanese women to attempt jumping a quad toe loop ( noted 4T ). This young skater, a senior skater this season, tried this jump many times but failed to succeed. We are going to look at the one she did during the last junior World Championships( march 2022), during the ISU Grand Prix of France (November 2022), and the 2023 Japanese National Championships ( December 2022). 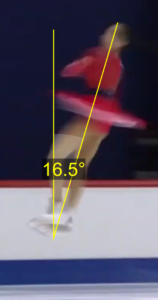 Why is she slow?

Data for Rion Sumiyoshi from Japan,

March 2022 Junior World Championships, Rion landed with a quarter issing (q), and then she stepped out.  She scored 4.75 points

In November 2022, she fell at the Grand Prix de France because of a poor landing. She landed into the “Angle of fall.” Scored 4.75 points

What is the “angle of fall”?

Due to a body weight transfer at the take-off not being efficient enough or a poor angular velocity, the landing quality is impacted. That’s why the skater could land in the “angle of fall.”

This angle is between under-rotated landing and around 30° (note that 0° is “q”). Landing at this slight angle only allows the skater to fall because of physics and gravity laws.  ( This is an extract of the ebook Figure skating: Jumps Techniques The guide to understanding the mechanics of the figure skating jumps, click HERE to order a copy)

What should Rion do to improve her success rate?

Improve the speed of her snap. In the orange circle, we can see the legs moving after the take-off, then the duration to get the final air position ( noted 1.).

After the change of foot, she could get an effective draw ( noted 2.). The main goal is to face more the future landing spot.